You are here: Home / Culture / Buildings / Ten Interesting Facts and Figures about the Dorchester Hotel 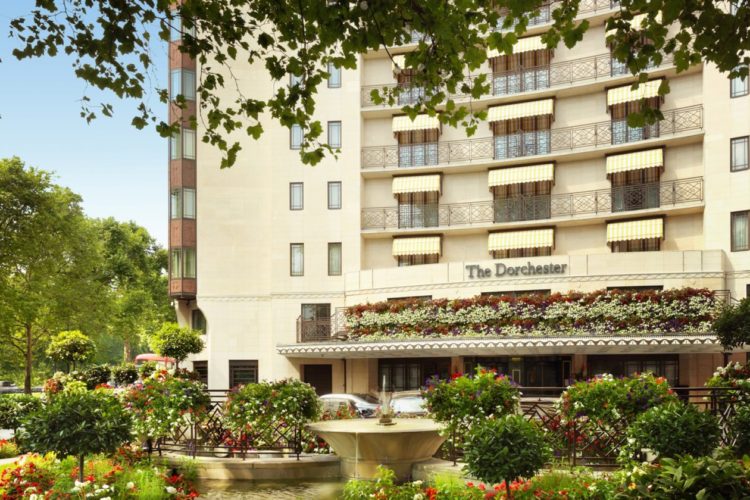 One of the pinnacles of prestige in London, the Dorchester Hotel is a five-star accommodation that is as known for luxury as the number of famous names who have stayed there since it opened in 1931.  Its guests have included everyone from poet Cecil Day-Lewis (father of actor Daniel Day-Lewis) to Queen Elizabeth II.  Designed in an art deco style, the hotel has maintained that aesthetic to this very day and with its five restaurants, offers an incredible stay to those who can afford it.  And even if you can’t, there are still a number of activities throughout the year that make visiting the Dorchester worth your time.

But first, Some Numbers

The Dorchester has 250 rooms including 182 individually designed guest rooms as well as another 65 suites and three roof suites.  One of these rooms or suites might run anywhere from £530 to £7,450 per night depending on the day of the week, the season, and the style of room you want.  The Dorchester also has five different restaurants.

There is a plane tree that is planted at the corner of the property in the front garden that has gained its own famous reputation.  In 1997, the London Tree Forum and Countryside Commission named it one of the “Great Trees of London.”  The hotel also decorates it with light bulbs that light up at night to add to its exterior ambiance.  For the hotel’s 80th anniversary, it planted all manner of trees around London to add to the city’s beauty and ecology.

At the time of its building, approximately 40,000 tonnes of earth were displaced in order to create the space for the hotel’s basement, which is as large underground as 1/3 of the building is on top.  Part of its art deco style includes marble bathtubs that are said to be the deepest in London.

Actually, the Dorchester is a listed building and has been since it earned Grade II listed status in 1981.

As mentioned, the Dorchester has five different restaurants:  The Grill, Alain Ducasse, The Spatisserie, The Promenade, and China Tang.  It also has three bars, two of which can be found in The Promenade and China Tang.  The sole bar is referred to simply as “The Bar.”  The restaurant styles vary from the warm comfort food of The Grill to the Michelin 3-Star Alain Ducasse.

Speaking of Alain Ducasse, for some unfathomable reason, the chef won’t permit any flowers in his restaurant.

Besides the two mentioned in the intro, film stars, writers, celebrities, and all manner of famous people have spent time in the Dorchester since its founding.  Some of these big names included Elizabeth Taylor, Alfred Hitchcock, Barbara Streisand, and Dwight D. Eisenhower, among others.  Eisenhower actually stayed here during World War II when he was still a Five-Star General and made the suite of rooms in which he staid his headquarters.  Today, these are collectively known as “The Eisenhower Suite” in his honor.  Prince Phillip had his stag night here.  Lastly, none other than the Sultan of Brunei owns the hotel (mostly through other corporations).

The excellent soundproofing in the hotel can apparently be owed to compressed seaweed in the floors and cork in the walls.  Hitchcock once said it would be the perfect place to commit a murder, with Hyde Park next door as the place to bury the body.

Harry Craddock was a bartender at the Dorchester from 1938 to 1947 after he left his employ at The Savoy.  It was during his time at the Dorchester that he made a Martini, a Manhattan, and a White Lady and put them into sealed containers in the wall of the bar.  They weren’t uncovered until 1978 and apparently were still quite drinkable.

Ted Whitcombe was a doorman at the Dorchester from 1958 to 2008, becoming the longest-serving employee in the hotel’s history.