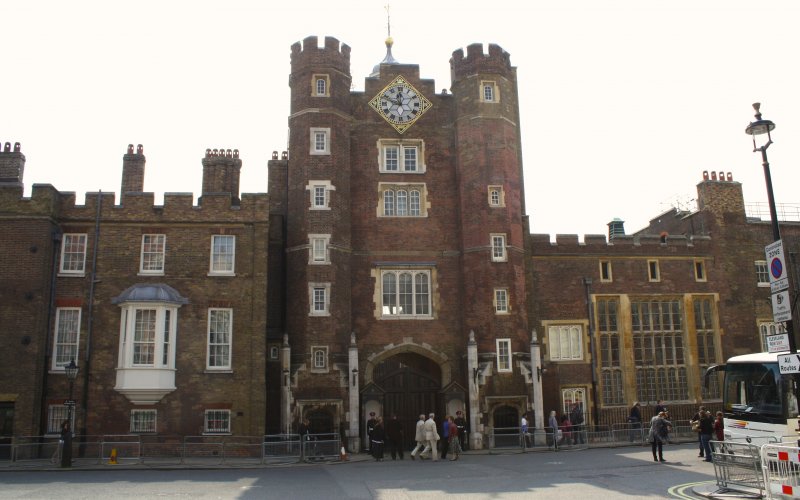 The most senior Royal Palace, St. James’s Palace, has been the seat of the British monarchy for centuries even though the Sovereign does not live there.  As such, the gorgeous Tudor-style building has been a key part of history since its construction and has many interesting stories to tell.  We’ve collected at least ten of these into the facts below, and they range from the site’s previous life to the fascinating artifacts contained within.  If you have any great stories about visiting St. James’s Palace, please share them with us in the comments and add an interesting fact or two of your own.

Origin of the Name…and Lepers

Prior to King Henry VIII’s commission of the palace, the site on which it sits today was a leper hospital dedicated to St. James the Less.  James was one of Christ’s disciples, and as there were two disciples named James, he is often referred to as “James the Less” or “James the Younger.”

While still a working palace, St. James’s does do tours, and one of the things to see is the palace’s armory, which houses a museum dedicated to the palace’s guards.  There’s an amazing collection of weapons from over the centuries here, including a 16th Century shield that was outfitted with a pistol.

Construction and Rise of Importance

The palace was constructed between 1531 and 1536 as a retreat for Henry VIII from the Palace of Whitehall and the court.  It served as little more than a residence during the Tudor period, but after the destruction of the Palace of Whitehall in 1691, the Court formally moved to St. James’s Palace.  It remained a primary Royal Residence until King George III purchased Buckingham House, later known as Buckingham Palace.  The Court, however, remained at St. James’s Palace, which is why ambassadors to the United Kingdom are now admitted: “to the Court of St. James.”

Charles I spent his last evening in St. James’s Palace prior to his execution in 1649.

While it’s pretty normal to see a home made of bricks now, during the Tudor Period, they were quite expensive, and homes were made of them not as much for fire protection but to show off the owner’s wealth.  Henry opted to have the palace built with bright red bricks and darker bricks for accents.  The north gatehouse is the most prominent feature of the palace and still bears the initials “HA” for Henry and his second wife, Anne Boleyn.

The State Apartments are one of the most notable areas of the palace.  These were largely destroyed by fire in 1809 and extensively remodeled during the 19th Century.  They’re quite ornate, and items there are made out of many previous minerals, including marble tables, malachite vases, gold gilded chandeliers, and silver tapestries.  The Monarch’s apartments, however, were not replaced after the fire, and so the Queen’s Chapel stands apart from the rest of the structure.

To Our Wives and Girlfriends, May They Never Meet

Kings George I and George II actually kept their mistresses at the palace.

While the last monarch to live there was King William IV before Queen Victoria made Buckingham Palace the primary Royal Residence in 1837, it does still serve as a home to members of the Royal Family.  For much of their lives, Prince Charles, Prince William, and Prince Harry lived in York House.  Now with his sons grown and with families of their own, Charles residences in Clarence House with his wife Camilla, Duchess of Cornwall.

The Queen’s Chapel was designed by famed architect Inigo Jones and still serves as a place of worship today. The Chapel Royal is also still in use, but unlike the Queen’s Chapel, it’s not open to the public.

Here are some of the best historical sites you need to visit in the UK and Ireland.