You are here: Home / Travel / Airports / Fly Away With Me: How London’s Airports Got Their Names 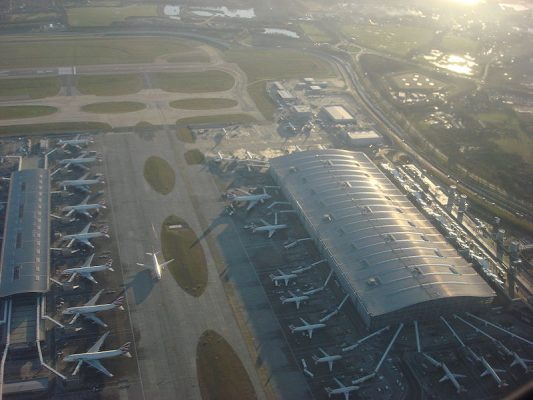 I’ll never forget what it was like to walk through the arrivals gate at Heathrow airport. Whereas other airports I’ve flown into might have an arrivals area with a few relatives hanging around or a man or two with a sign that never had my name on it, Heathrow makes you feel like a rock star or celebrity, with the friends and family members of other flyers waving and cheering. Of course, Heathrow is only one of the airports that serve London. While most people will only think of it or Gatwick, there are actually six airports that serve the area: Heathrow, Gatwick, London City, Stanstead, Luton, and Southend. Six airports with six names, but how did they come by those names in the first place?

Located further out of the city in the County of Essex, Southend is situated between Rochford and Southend Town Centres. The airfield began as a military base for the Royal Flying Corps (precursor to the RAF) in 1914, then was turned over to the Royal Navy Air Service, and became a commercial airport in 1935 before being requisitioned by the RAF in 1939 for war time. Following the war, the airfield returned to the control of the Southend Council, which is where the airport gets its name. The Town of Southend started as the literal “south end” of another village named Prittlewell. The Council sold it to a private corporation in 1994 and a new terminal and rail station were constructed to serve the airport.

To the northwest of London is Luton Airport, another further afield location that can be found in the Borough of Luton. The Town’s name originates from the Saxons, who founded an outpost (also known as a “tun) in the 6th Century there along the River Lea, effectively making it “Lea tun”. Between that time and the 9th Century, the spelling changed to Luton, which is how it appears in the Anglo-Saxon Chronicle. The airport itself was opened in 1938 by the Secretary of State for Air, Kingsley Wood, but it wouldn’t be long before it was conscripted for the war. Originally managed by the Luton Council, it was sold to private corporations about thirty years ago and rebranded as Luton Lond Airport to emphasize its proximity to the city.

Just a bit further east of Luton is Stansted Airport, which got its start in 1943 as a joint base for the RAF and United States Army Air Force. It name came from the local village of Stansted Mountfitchet. Stansted was a Saxon settlement whose name means “stony place” in Anglo-Saxon. Following the end of the war in 1945 and the Americans’ withdrawal from the region, the Air Ministry took it over and used it as a storage location and camp for German POWs. By the 50s and 60s, the government began to develop it as an airport for charter flights and later developed it for commercial airlines. The airport has been subject to a legal tug-of-war as to whether the British Aviation Authority should sell it, which it did in 2013.

Kind of self-explanatory, really. The airport is a bit east of Canary Wharf and is located in the Borough of Newham. It is the youngest of the city’s airports, having opened in 1987 and despite an already-crowded London airspace, it has thrived and been extended twice. The location next to the Docklands and the financial district means that many of the passengers are business people.

The name “Gatwick” is found first in 1241 in legal documents in which Richard de Warwick assigned his rights in the property on which the airport sits to John de Gatwick and his heirs, effectively creating the Gatwick estate. It passed through various families until it was sold to the Gatwick Race Course Company in 1890 which transformed the estate into a horse racing course. It didn’t become an airfield until after WWI and the Air Ministry issued the first public license for commercial aircraft there in 1934.

The busiest airport in the UK, Heathrow began life as a relatively quiet hamlet baring the same name. The area had been settled since the Neolitic period, but the first known mention of its name comes in 1410 as “Le Hetherewe” (also spelled Hithero, Hetherow, Hetherowfeyld, Hitherrowe, and Heath Row) with the name in middle English meaning a row of houses situated on a heath. Fairey Aviation purchased the land on which Heathrow Airport sits in 1929 to build an airfield at which it could construct and test its aircraft. As with its neighbours, Heathrow was requisitioned by the RAF during WWII and later transferred ownership to the Ministry of Civil Aviation in 1946, who opened it for commercial aviation that year.