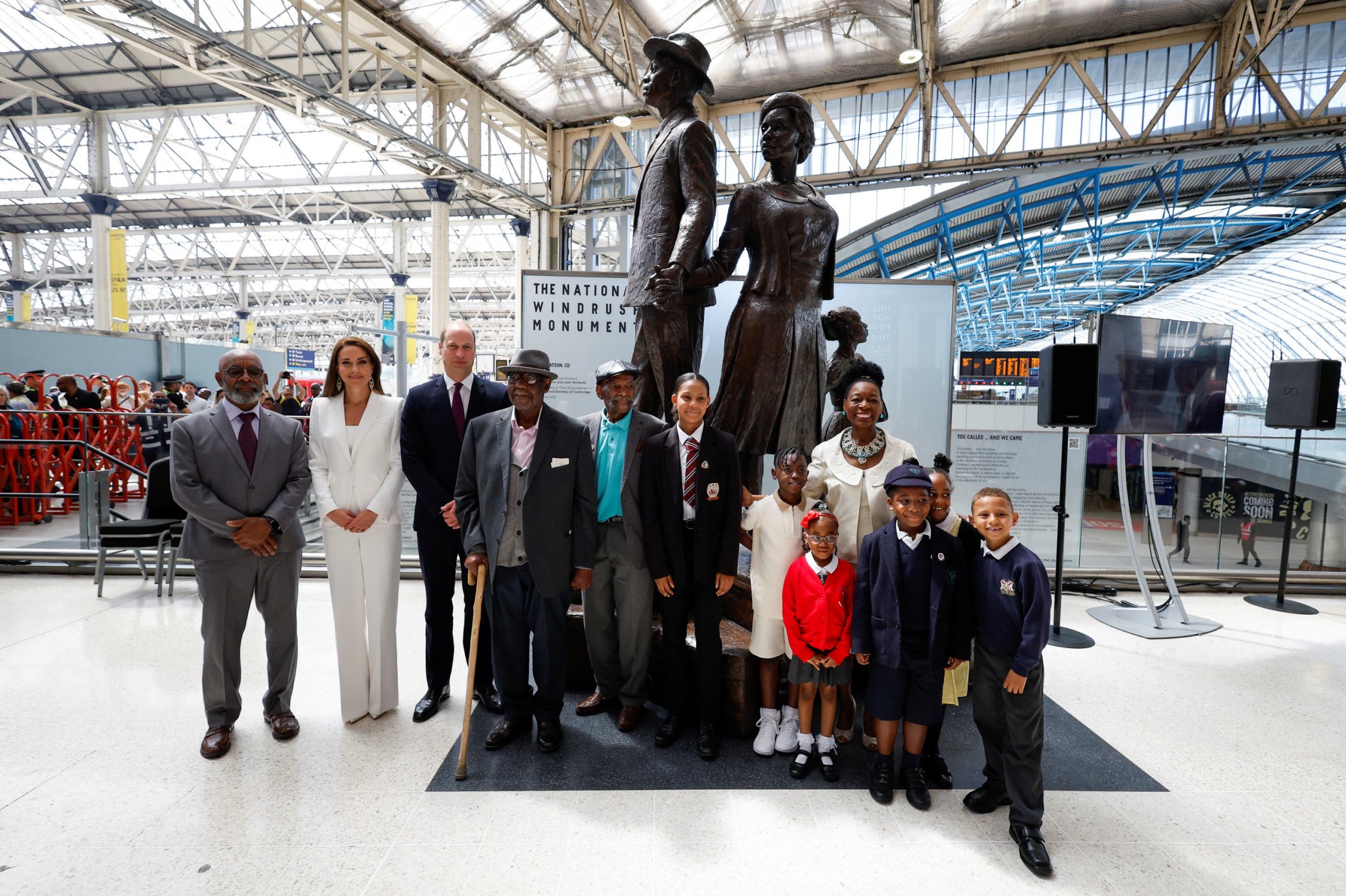 Black men and women are still facing racism and discrimination in modern-day Britain in a nation that would be poorer without the efforts of the Windrush generation, the Duke of Cambridge has said.

William was speaking as he and the Duchess of Cambridge attended the unveiling of a national monument at London’s Waterloo Station to celebrate the dreams and courage of the Windrush generation who came to help Britain rebuild after the Second World War.

The monument is a 12-ft statue – of a man, woman, and child in their Sunday best standing on top of suitcases – that was unveiled on Wednesday to mark Windrush Day.

In a speech to those who had gathered for the unveiling, which included Windrush passengers and high-profile members of the black community, William said: “We know without question that the Windrush generation have made our culture richer, our services stronger, and our fellow countrymen safer.”

William also spoke of the Windrush scandal which began to surface in 2017 after it emerged that hundreds of Commonwealth citizens, many of whom were from the Windrush generation, had been wrongly detained, deported, and denied legal rights.

He said: “Sadly, that is also the case for members of the Windrush generation who were victims of racism when they arrived here, and discrimination remains an all too familiar experience for black men and women in Britain in 2022.

“Only a matter of years ago, tens of thousands of that generation were profoundly wronged by the Windrush scandal. That rightly reverberates throughout the Caribbean community here in the UK as well as many in the Caribbean nations.

“Therefore, alongside celebrating the diverse fabric of our families, our communities, and our society as a whole – something the Windrush generation has contributed so much to – it is also important to acknowledge the ways in which the future they sought and deserved has yet to come to pass.

“Diversity is what makes us strong, and it is what reflects the modern, outward-looking values that are so important to our country.”

Next year marks 75 years since the arrival of HMT Empire Windrush at Tilbury docks in 1948, bringing 500 passengers from the Caribbean.

William spoke of the wide-ranging areas of British life which have been shaped by the work and skills of the Windrush generation and their descendants including commerce, manufacturing, sport, science, engineering, and fashion.

They have also provided valuable work for the transport system and the NHS which was founded two weeks after the Empire Windrush docked in England in 1948.

The Government, which has provided £1 million in funding for the monument, said it “symbolizes the courage, commitment, and resilience of the thousands of men, women, and children who traveled to the UK to start new lives from 1948 to 1971”.

It also acknowledges the Windrush generation’s “outstanding contribution” to British society and is intended to be “a permanent place of reflection”, it added.

Communities Secretary Michael Gove described the event as a “historical and profoundly moving moment” but also said “sorry” for the pain which had been caused by the Windrush scandal.

The Windrush generation had faced discrimination when they arrived in Britain and, in a reference to the scandal, he added “mistakes were made by the state”.

Mr. Gove said: “I want to emphasize how sorry we in Government are for those mistakes. Words can’t make up for the hurt and anguish that was caused but lessons have been learned.”

The Queen also sent her congratulations on what she described as a “historic occasion”.

In a personal message, she wrote: “The unveiling at Waterloo Station on Windrush Day serves as a fitting thank you to the Windrush pioneers and their descendants, on recognition of the profound contribution they have made to the United Kingdom over the decades.

“It is my hope that the memorial will serve to inspire present and future generations and I send you my warmest good wishes on this historic occasion.”

Waterloo station was chosen because thousands of people who arrived from the Caribbean passed through the station on their way to start their new lives across the country, the Government said.

The unveiling is one of dozens of events and activities across England to celebrate Windrush Day 2022.

The first glimpse of the statue came when the drapes which covered the statue were gently pulled away by the royal couple, Windrush pioneers Alford Gardner and Joh Richards, both aged 96, plus a group of schoolchildren.

It was created by Jamaican artist Basil Watson, who said his monument pays tribute to the “dreams and aspirations, courage and dignity, skills and talents” of the Windrush generation who arrived with “a hope of contributing to a society that they expected would welcome them in return”.

He said: “My parents, along with a great many others, took the long arduous voyage from the Caribbean with very little or nothing other than their aspirations, their courage, and a promise of opportunity for advancement.

“This monument tells that story of hope, determination, a strong belief in selves and a vison for the future.”