You are here: Home / Culture / Art / New sculptures of Queen and Philip to complete Royal Albert Hall for 150th Anniversary 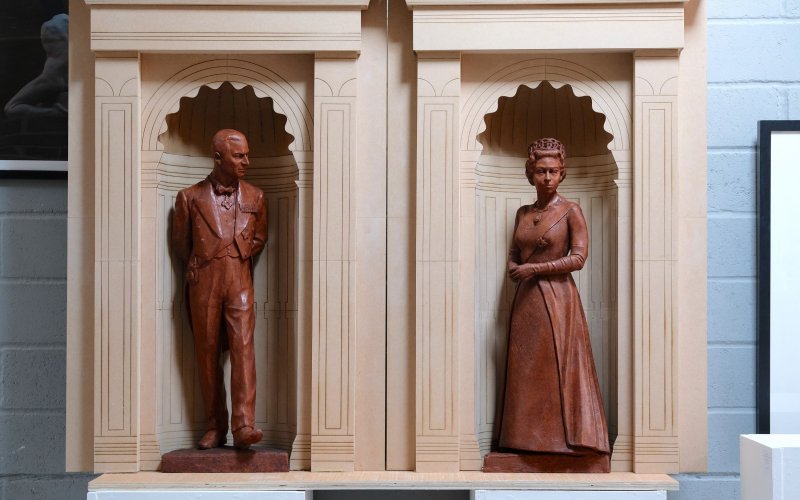 The Royal Albert Hall has commissioned two new life-size sculptures of the Queen and the late Duke of Edinburgh to mark its 150th anniversary.

The bronze figures – along with two new statues of the Queen Victoria and Prince Albert – will be permanent additions to the historic London venue and will be unveiled next summer.

The artworks of the Queen and Philip, depicting them in the mid-1960s, pay tribute to the couple’s shared lifetime of service, and the late duke’s “faithful devotion” to his wife, as he gazes towards her.

The statues will complete the building by filling the South Porch, which was added in 2003, while Victoria and Albert’s will stand in the niches of its North Porch – which have lain empty since 1871.

Philip, the nation’s longest-serving consort, died aged 99 in April and the Queen, who is set to mark her Platinum Jubilee in 2022, has been under doctors’ orders to rest for nearly a month and has also sprained her back.

The Royal Albert Hall was conceived by Albert – the Prince Consort – and opened by Queen Victoria – who named it in memory of her late husband.

Maquettes of the sculptures – two Queens and their beloved consorts – arrived at the venue this week, ahead of the creation of the full-size pieces.

They show a young Elizabeth II, in her late thirties, in the impressive Vladimir Tiara, as well as the George VI sapphire necklace and earrings which she received her father as a wedding present.

Poignantly, on her wrist will be the Edinburgh wedding bracelet, which Philip gave as a present to his new bride in 1947.

The Queen is shown in evening dress with long gloves, in a gown inspired by the Sir Norman Hartnell era.

Philip will be depicted in a white tie, wearing a number of his orders and military medals.

Poppy Field, who designed the Queen and Philip’s statues, took inspiration from Dorothy Wilding’s portraits of the couple ahead of their wedding.

“One of Dorothy Wilding’s particularly poignant July 1947 photographs captures Prince Philip looking over to the Queen, who looks directly out to the viewer,” she said.

“Taken just a few months before their marriage, this image symbolizes Prince Philip’s faithful devotion to the Queen and the Queen’s promise to the nation.”

She added: “My goal is to visually connect the statues of the Queen and Prince Philip with depictions of Queen Victoria and Prince Albert, as well as represent something unique in each statue that would together embody the romantic appeal of their royal marriage.”

The stone figures of Victoria and Albert will be by Tom Brown and Tom Nicholls of London Stone Carving.

The two couples will be captured at similar ages, with the Queen in her late thirties and Philip in his early forties.

Prince Albert died in 1861 at the age of 42. Victoria and Albert were both 32 in the year of the Great Exhibition.

The commissions followed a competitive process involving a shortlist of seven sculptors supported by the Queen Elizabeth Scholarship Trust (QEST), a charity dedicated to supporting excellence in British craftsmanship.

The Queen is patron of the Royal Albert Hall but missed the Festival of Remembrance it staged on Saturday after being told to rest, following preliminary investigations in hospital in October 20.

Ian McCulloch, president of the Royal Albert Hall said: “The Hall is in our temporary stewardship, and it’s our duty to ensure it is here to inspire generations to come.

“As well as launching artistic and engagement programs as part of our 150th-anniversary celebrations, we wanted to commemorate the milestone with something tangible, and these sculptures will finally complete the facade of our glorious Grade I-listed building.

“This anniversary gives us the opportunity to recognize the enduring support of our Royal patrons, and leave a legacy of public art of a high quality and craftsmanship, for which we are honored to commission the QEST scholars.”