With the coming of the Hanoverian kings came a new style of architecture that bore their name—Georgian.  This style of design was defined by symmetrical features, front entries with crowns, pilasters, and transom windows, corner quoins, cornice dentils, and typically made of stone or brick.  These features had their roots in ancient Greek and Roman design and the name stuck with architecture of the era from the reign of King George I beginning in 1714 through that of King George IV ending in 1830.  We’ve identified our ten favorite examples of the Georgian style below, but you can let us know your own favorites in the comments. 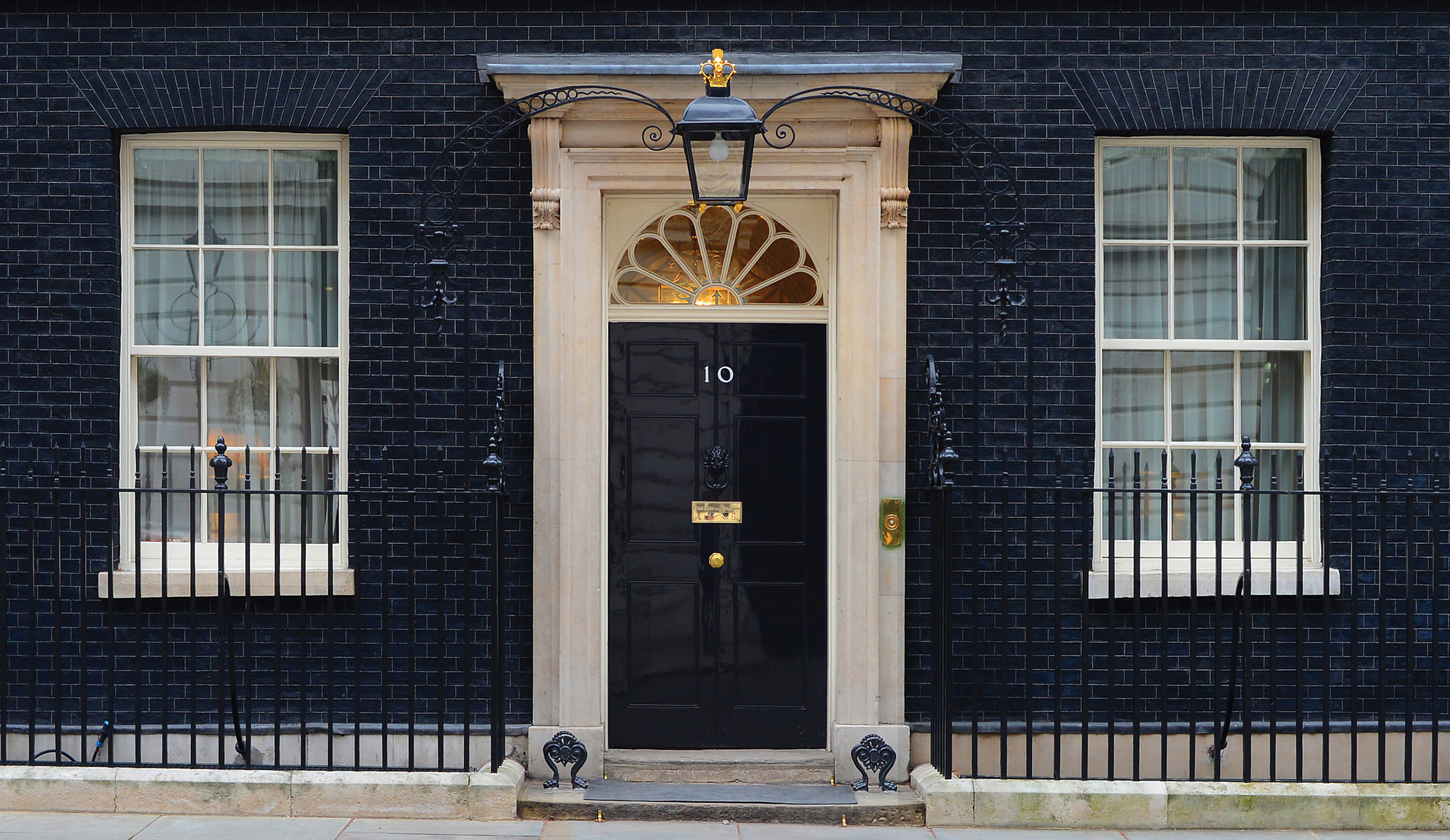 While it arguably deserves to be higher on this list, I couldn’t resist the irony of placing the Prime Minister’s residence at no. 10.  The home was once three buildings that existed long before King George I arrived in England, but it was combined and enlarged beginning in 1733 for Sir Robert Walpole, the First Lord of the Treasury, an office that would come to be known as Prime Minister.  The famous door was installed in 1775, and several Georgian features are apparent in that alone. 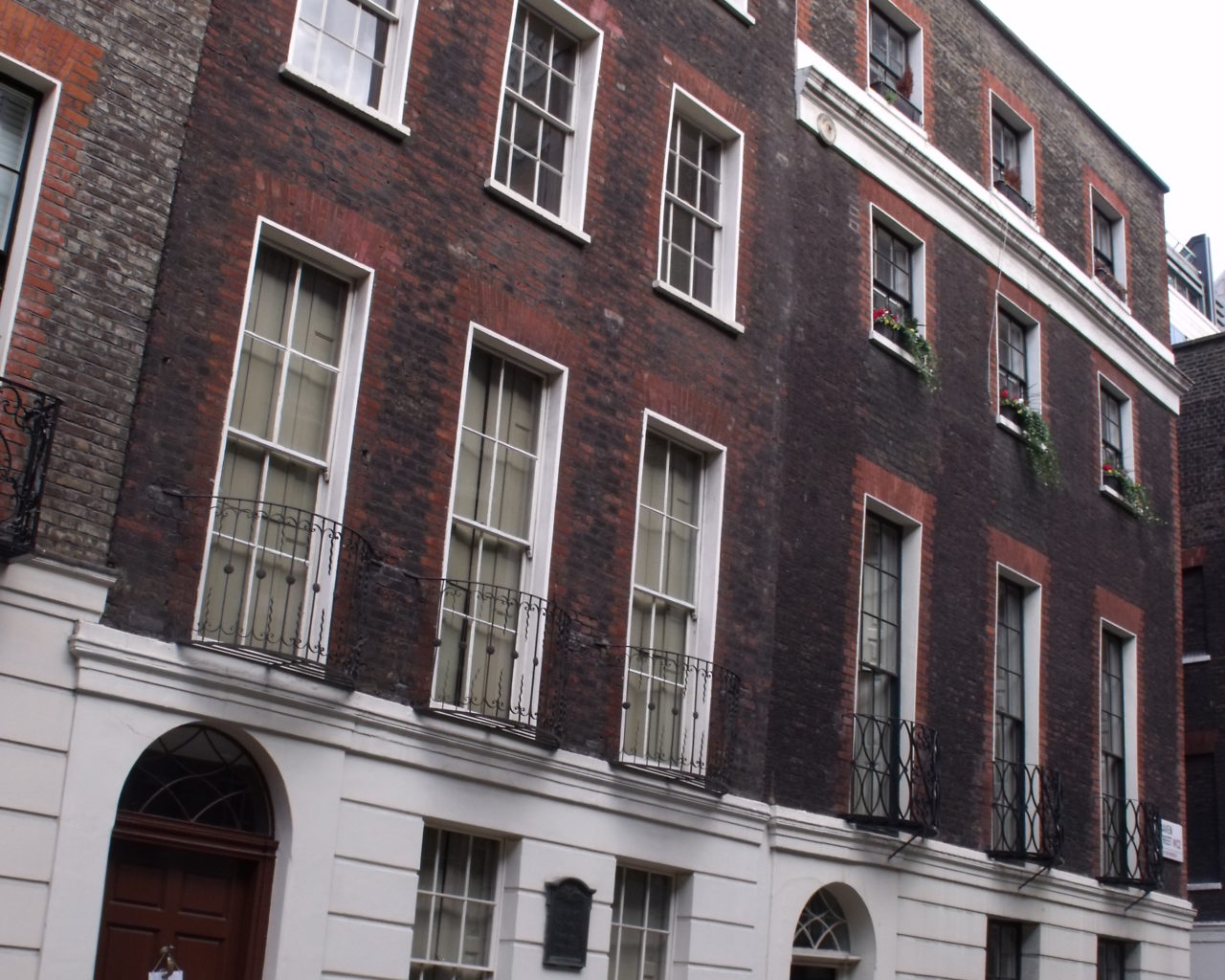 Speaking of homes, London’s townhomes provide some of the best examples of Georgian architecture, and the Benjamin Franklin House is certainly one of the top specimens.  Built in 1730, the front entrance, windows, brick, and iron fence are all standard features of the Georgian style.  Home to a museum on Benjamin Franklin’s life and time in London, it is the only one of his residences still standing in the world. 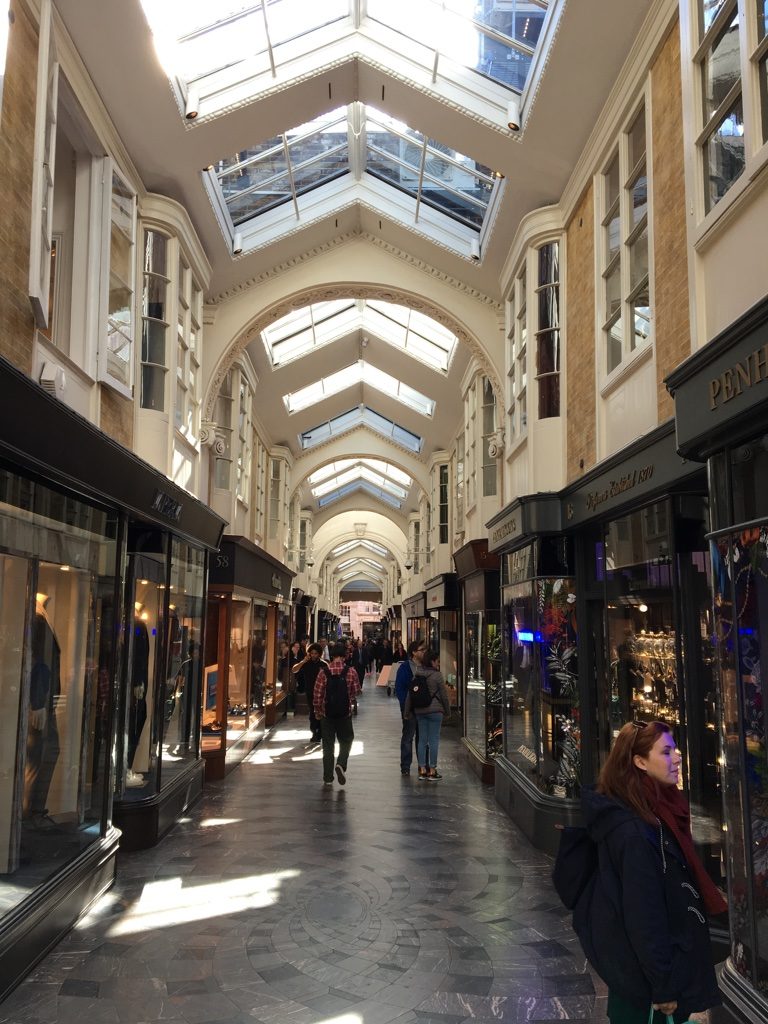 One of the oldest pedestrian shopping centers in London, Burlington Arcade was built on the order of His Grace George Cavendish, the 5th Duke of Devonshire, “for the sale of jewelry and fancy articles of fashionable demand, for the gratification of the public.”  At its opening in 1819, it featured a single straight top-lit walkway with seventy-two shop and residential units. 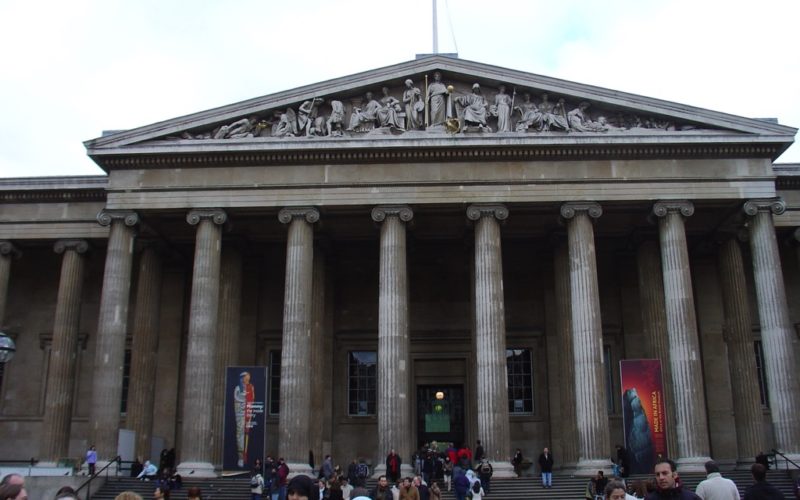 The first public institution to appear on this list, the British Museum as it exists today began construction in 1823 based on the neoclassical designs of Sir Robert Smike.  The construction actually didn’t finish until 1852, but Georgian neoclassical features are all over the building, with the columns and pediment intentionally meant to evoke the wonders of Greece and invite the public inside to see the objects housed within. 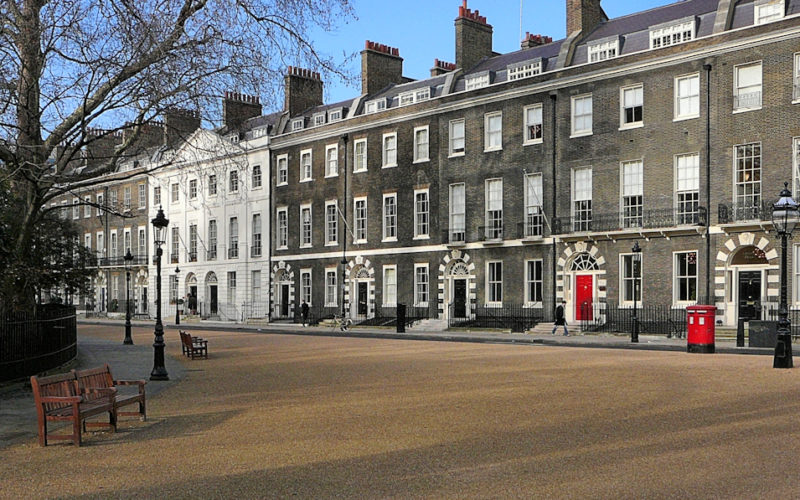 Heading back over to townhomes that exemplified the period, Bedford Square is not only an excellent example of Georgian residential architecture but also one of the earliest examples of a planned neighborhood.  It includes not only the townhomes but the gardens that they surround, providing the residents and the general public with greenspace.  Although most of the homes now exist as office buildings, the square is still Grade II listed and one of the best examples of a preserved Georgian garden square. 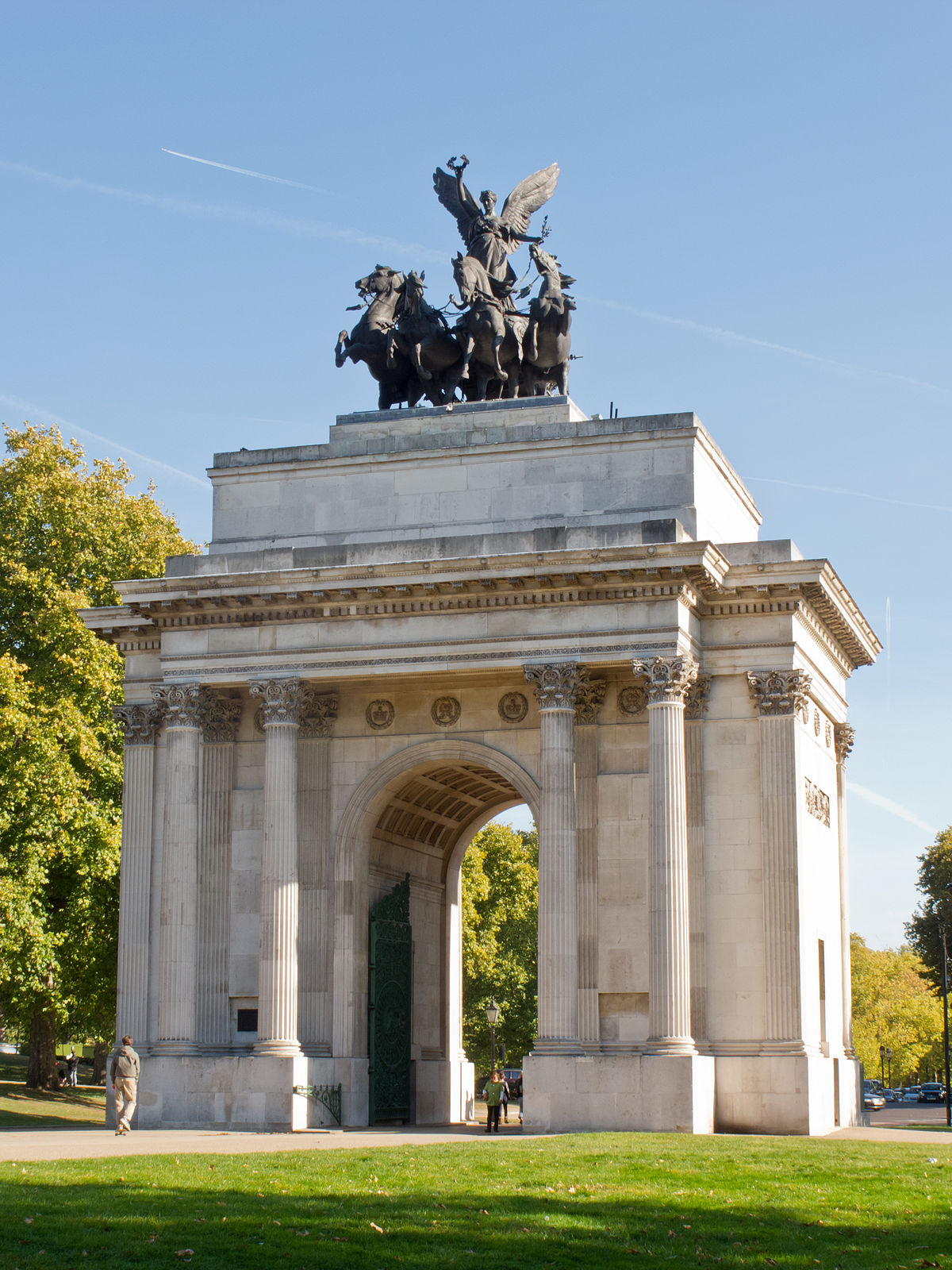 Along with the Marble Arch, the Wellington Arch was ordered built by King George IV to commemorate the country’s success in the Napoleonic Wars.  Constructed from 1826 to 1830, it was originally meant to be an entrance to Central London from the West and located at Constitution Hill.  A statue of Wellington was also placed on top, though it was replaced with the quadriga statue depicting Nike when the arch was moved to its present location to Hyde Park Corner in 1882. 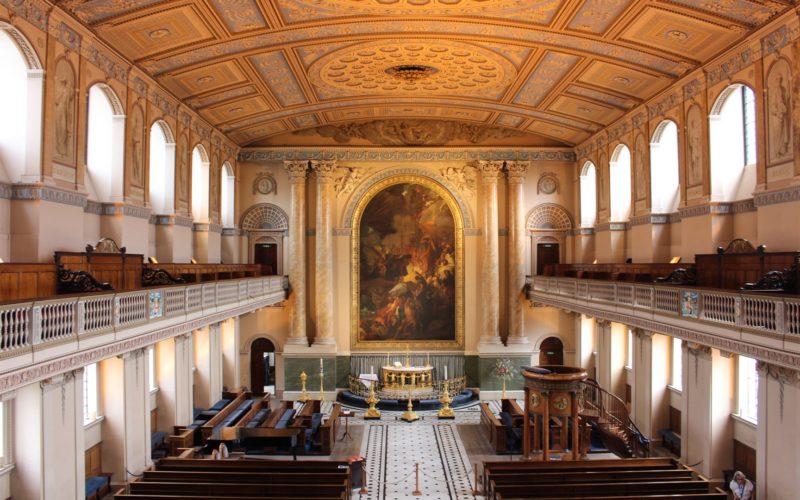 While almost the entirety of the Old Royal Naval College would qualify as Georgian, the chapel is one of the finest examples of neoclassical architecture in the church.  The Chapel of St. Peter and St. Paul was designed by William Newton and James Stuart, whose personal style adhered so closely to the Neoclassical style that his nickname was “Athenian.”  Built as a place of worship for sailors recovering at the Royal Naval Hospital, maritime themes exist throughout the building.  The artistic architecture utilizes many squares and octagons that are part of interior Georgian design. 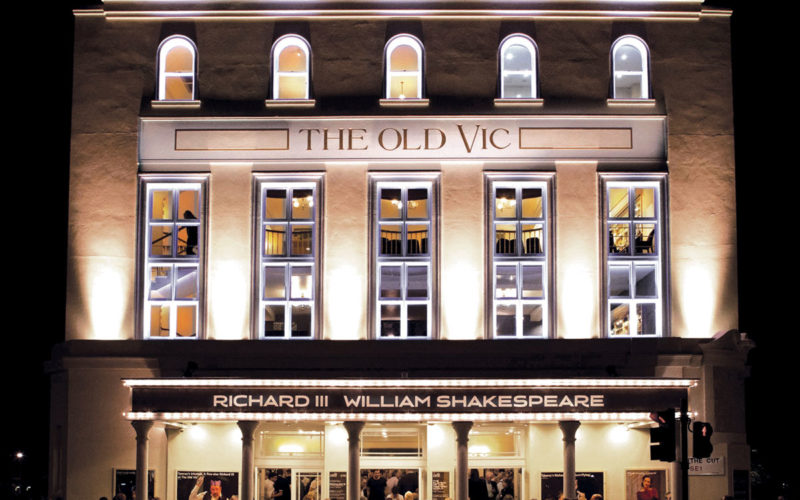 One of the greatest theaters in London, the Old Vic first opened in 1818 as a “minor” theater, which meant it was prevented from putting on serious dramas.  It has been refurbished a number of times over the years but has maintained its neoclassical façade including the windows, columns, and the pediment with crown.  Originally known as the Royal Coburg Theater, it changed its name to the Royal Victoria Theater and shortened to the Old Vic. 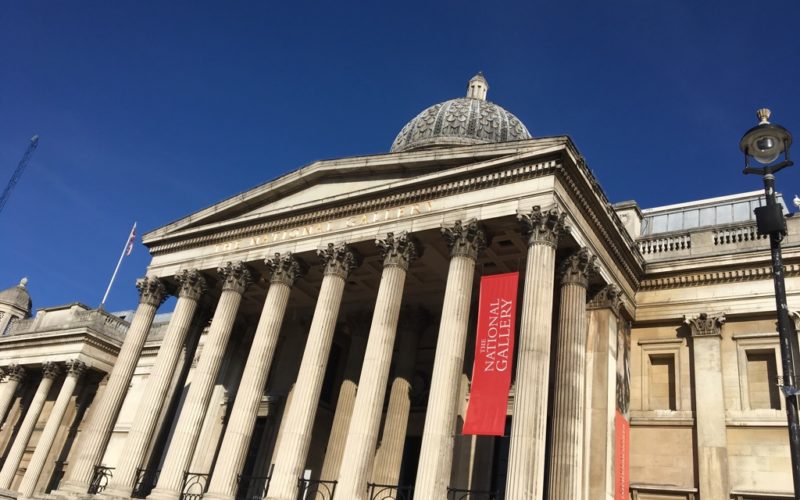 Despite the construction of the National Gallery beginning in 1831, it still has a lot of Neoclassical features that put it firmly in the Georgian architectural period.  This adherence to the style was perhaps a result of William Wilkins’s desire for England to have its own “temple of the arts” and so he hired John Nash who stuck with Neoclassical style despite the emergence of post-Gothic that would come to dominate the time between the Georgian and Victorian periods. 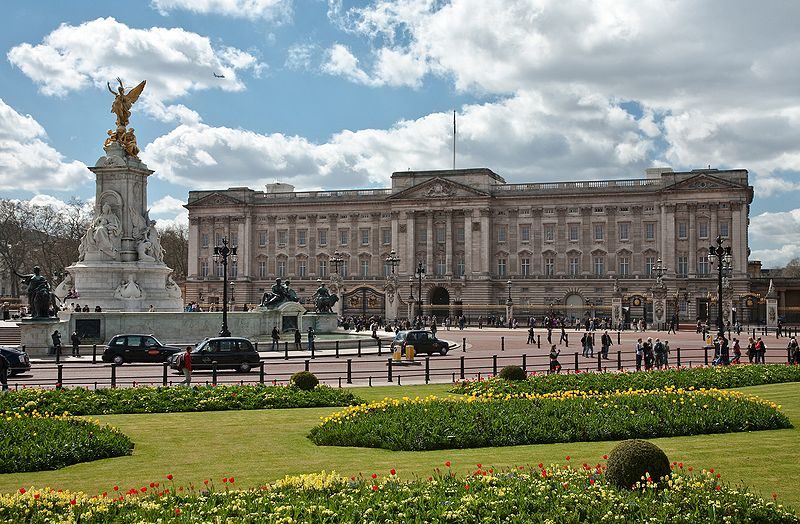 Buckingham Palace, or Buckingham House as it was originally known, is perhaps the best direct example of Georgian architecture as the current building was commissioned directly by King George III for his wife, Queen Charlotte.  After his death, his son, King George IV, opted to continue the renovations into its present Neoclassical design courtesy, once again, of architect John Nash.  George IV intended to live here himself, but it never came to pass after his death in 1830 and wouldn’t become the home of the monarch until Queen Victoria moved there in 1837.  When a new wing was built for her and Prince Albert’s growing family, the new East Wing largely adhered to the rest of the building’s Georgian design, perhaps owing some to Albert’s own Germanic heritage.