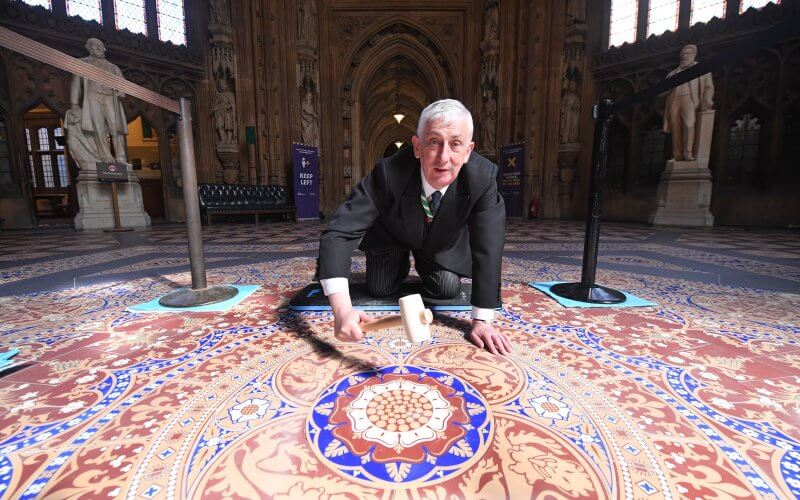 The final handmade tile in the restoration of a lobby at the heart of the Palace of Westminster has been laid.

Almost 60,000 have been restored and replaced in the middle of Central Lobby, including original ones which were designed by Augustus Welby Pugin that would have carried the footsteps of Winston Churchill, William Gladstone, Margaret Thatcher, and countless other political figures.

Stonemason Andy Midwinter said: “It really feels like the end of an era.”

The work on the vividly-colored tiles, which had deteriorated after 150 years of use, took nine years to complete.

Mr. Midwinter said: “It’s a really special moment because the tile is a one-off.

“A job like this comes with a real sense of pride because you’re working in a historic place like the Palace of Westminster, and speakers and prime ministers in decades to come are going to be walking over this floor that I’ve laid.”

The key central tile, which was removed along with its surrounding panels in 2015 amid fears its complex design would be worn away, is now in place in time for the State Opening of Parliament on May 11.

The new tiles, which were made to match the original one inch/25.4mm thick tiles, were produced in a factory in Shropshire by impressing a pattern into unfired clay to a shallow depth using a hand-carved mold.

The indentations were then filled with a liquid clay of contrasting color before being laid by specialist stonemasons on Parliament’s uneven floors.

Symbols like the shamrock, thistle, Tudor rose, and dragon of St George, which represent different parts of the UK, are part of the unique designs.

There are also letter tiles with wording in French, Latin, and English to commemorate Queen Victoria, who was the monarch at the time the Palace of Westminster was constructed.

Central Lobby is at the very heart of Parliament, used by constituents to lobby their MPs, and is one of the main thoroughfares between different areas of the building.

During the State Opening of Parliament, viewers across the world will see Mr. Speaker and his procession walking across the tiled pavement, on the way to the House of Commons chamber, shortly to be followed by Black Rod, who will bang on the door to summon MPs to hear the Queen’s Speech.

Sir Lindsay Hoyle, Speaker of the House of Commons, said: “The tiles are such an integral part of what makes this building such a special place, and they always catch my eye as I walk through Central Lobby to take my seat in the Speaker’s Chair.

“Having this final tile in place now really is the icing on the cake.”

Lord Fowler, the Lord Speaker, said: “I was first elected to Parliament over 50 years ago, so I’m one of generations of politicians who have walked the corridors here and worn the old tiles out!

“Long after I’m gone, these tiles will still be here, awaiting the footprints of Parliamentarians of the future.

The Lords’ Lobby was the first area to be completed in 1847, followed by Commons’ Lobby and Central Lobby, while St Stephen’s Hall was completed in February 1852.