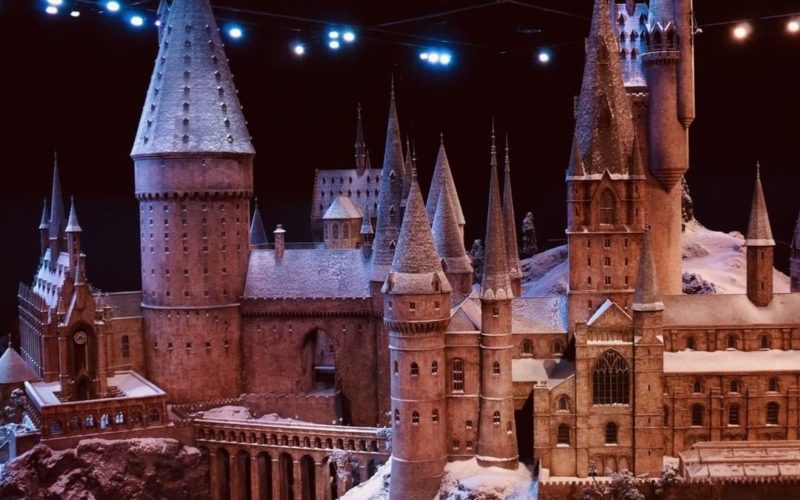 The holidays take over Greater London in December, but Christmas events aren’t the only things happening in the city.  London has a lot going on during the month of December, and we’ve found quite a few things to do that aren’t necessarily related to Christmas, from great beasts to the chilliest of swim competitions.  If you’re looking for London Christmas events, we also have that article to check out this month, but in the meantime, enjoy one of these five things to do and let us know some of your own favorite December events in the comments.

The Warner Brothers Studio Tour is a must for any Harry Potter fan throughout the year with its models and sets galore, but during the winter months, things kick up a notch as Hogwarts in the Snow takes over.  The Hogwarts model becomes covered in snow, and the Great Hall takes on the Christmas decorations seen throughout the films.  The best part is that the tour will show you how all these magical effects were produced, hopefully deepening your appreciation of the films.

The Peter Pan Cup takes place on Christmas Day but isn’t necessarily related to the holiday itself.  Members of the Serpentine Swimming Club line up on the shore in Hyde Park to go for the chilliest of races as they plunge into the Serpentine’s cold waters.  The races have been going on since 1864, and the club also holds races on Saturdays with the distance depending on the water’s temperature.  On December 25, the Serpentine’s temperature sits at about 40 degrees Fahrenheit, but that doesn’t stop the club members from finishing their hundred-yard competition.  Keep in mind that you have to be a member of the Serpentine Swimming Club to participate, but anyone is welcome to watch.

Chanukah is one of Judaism’s biggest holidays, and it gets a celebration like no other in London.  This year, the eight-day festival begins on December 22 with the lighting of the Trafalgar Square menorah that is accompanied by music, dancing, and food around the square.  While the menorah lighting on the 22nd is the big event, as is the tradition, the menorah stays lit throughout the holiday.  Chanukah on Trafalgar Square is the largest Jewish celebration in the UK and sees thousands of people attend.  Whether you’re Jewish or Gentile, all are welcome at this festive time.

Beasts of London is a great exhibit currently going on at the Museum of London that shows how animals have helped shaped the city’s history and development.  This history is explained to visitors by the animals themselves from viruses to horses, voiced by such well-known actors as Nish Kumar, Stephen Mangan, Kate Moss, and Brian Blessed, amongst others.  Of course, it’s more than just listening to stories being narrated by celebrities, Beasts of London is a fully-immersive experience that is enjoyable for children of all ages.

Gingerbread City at the Museum of Architecture

Not one to miss out on the holiday festivities, the Museum of Architecture gets in on the fun this month with its Gingerbread City exhibit.  You may have seen dozens of gingerbread houses in the past, but you’re probably not ready for the spectacular sight of an entire metropolis made of gingerbread.  Professional architects and designers commit dozens of buildings to the museum’s exhibit that range from carefully constructed replicas to uniquely original models.  Contributors buy a plot on which to create their gingerbread buildings and the money raised helps go to the Museum of Architecture’s grant fund.