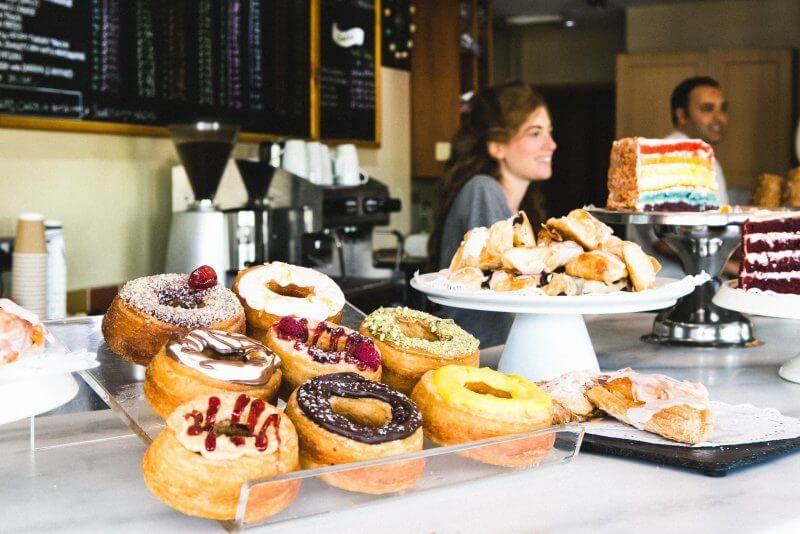 Found, fried, doughy goodness.  Everyone loves a good donut in the morning—or for dessert—or any time really.  There are plenty of great places in the States to get them such as Krispy Kreme, Dunkin Donuts, and even the high-class Dominique Ansel Bakery.  Of course, London has its share of these places and even more to boot.  Whether you’re in the mood for a plain cake donut, a jelly donut, or something uniquely flavorful, we have found five donut shops in London that can cater to your taste buds.  Let us know some of your own favorite places for donuts in the comments.

Since it was originally introduced at Dominique Ansel Bakery, variations of the cronut have spread all over the world, and Rinkoffs Bakery in London has its own great take on the pastry called the Crodough.  Of course, Rinkoffs isn’t content to offer only one flavor and has plenty of toppings including oreo, raspberry, toffee apple crumble, peanut butter & jelly, and much more.  You can purchase individually or select from a few assortments, including the Crodoughbouche, a towering stack of 250 Crodoughs that’s perfect for catered events and gatherings. What’s more, going to Rinkoffs means supporting a local, family-owned business that’s been in London’s East End since 1911.

While lots of doughnut shops fry their products, Dum Dum Donutterie only bakes its delicious selection.  Dum Dum offers its own take on the cronut, but with some far-out toppings, you won’t see anywhere else.  The options at any of their three locations include the dulce de leche Peter Andre’s Yum Yum Dum Dum, the coconut-infused Croconut, and the super-popular Zebra with layered traditional and chocolate croissant dough.  Dum dum also has a great selection of traditional doughnuts such as the Crème Brulee and the Chocolate Ganache and Hazelnut.  In the past, they even had an ice cream cone made from their croissant-doughnut dough.

With three locations in London, Bread Ahead in Borough Market is the one you’ll want to visit most.  There you can get up close and personal with the Bread Ahead’s stalls donut selection which features rows and rows of stuffed doughnuts.  While the flavors may change occasionally, some of the best options there are the vanilla custard, praline, raspberry jam, and more.  If you can’t make it there, Bread Ahead’s recipe book is available for purchase and will teach you how to make many of their wonderful treats.

For something fresh and unique, we suggest trying one of Crosstown Doughnuts’ multiple locations.  The bakery makes its doughnuts with rising sourdough bread and leans heavily towards fruit flavoring.  Some of the options you can get there include Peach & Nectarine, Homemade Raspberry Jam, and Yuzu & Passionfruit.  They also like to do their own takes on the traditional vanilla glaze, cinnamon rolls, and cinnamon sugar.  Lastly, if you’re looking for vegan options, you can pick up a selection featuring a variety of guiltfree treats.

St. John is a restaurant largely known for its high-class fare, and the doughnuts are no exception.  The restaurant opened up Neal’s Yard Bakery and St. John Bread and Wine, both of which serve up rich and delicious stuffed doughnuts.  Whether you want custard, chocolate crème, raspberry, butterscotch, and more.  Of course, all St. John locations offer doughnuts, though some may be dependent on the day.  With their lunch and dinner menu options, grabbing a doughnut on your way out makes for a great to-go dessert.