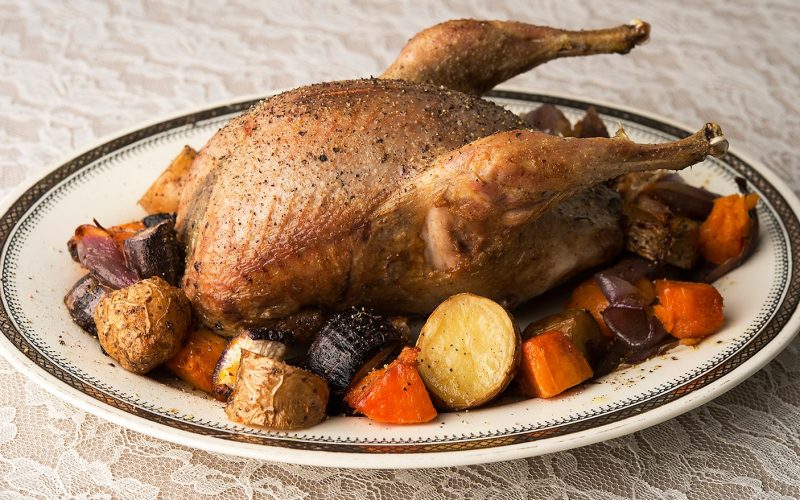 Sure, we’ve covered foods invented in London before, but did you know there’s even more where the likes of wedding cakes, Earl Grey tea, and Scotch eggs came from?  Some are more recent inventions while others stretch back centuries.  You can have just about any of these today in some of the most exclusive restaurants or mom-and-pop eateries.  Each of the five foods below is a wonderful piece of London cuisine with its own unique history and impact on London.  If you think there’s something we left off or you want to share one of your favorite London dishes, let us know in the comments.

A medium-to-large game bird is a particularly fine dish when it’s roasted and nobody does it better than the place that invented it—Rules.  You might wonder what something like this is doing on the list, but Rules’ roast grouse is unquestionably a London invention as it has been on the menu since it opened as the city’s first restaurant in 1798.  Rules serves the dish with game chips, bread sauce, and redcurrant jelly.

Peek Freans, the renowned biscuit company located in Bermondsey, introduced this sandwich-style biscuit in 1910.  Two years before Oreos appeared in the United States, what was originally called Creola featured two thin chocolate biscuits with a layer of chocolate buttercream between them.  In the 1930s, they added the Bourbon name to the biscuits after the royal line from France and Spain, but it doesn’t really have anything to do with them and there is no actual bourbon used in the recipe.

While Harlem in the States is famous for inventing chicken and waffles, you can only find duck leg and waffles in London.  Deciding not to bother with a clever name (I mean, why not just advertise what you do best?) Duck & Waffle in Heron Tower offered this dish when it first opened in 2012.  The signature dish is available on the “All Day” menu (and since it’s open 24-hours, they mean “all day”), so it doesn’t matter whether you go in for brunch or a late-night meal.  The duck leg itself is topped with a fried duck egg and the waffle comes with deliciously-sweet maple syrup which is just perfect.

This local invention came about courtesy of London’s Jewish community in the 1800s.  Salting beef had long been popular in the UK prior to the invention of refrigeration, but it took on a new life when put in a bagel.  Adding some mustard and maybe pickles to the salted beef bagel gives you one heck of a sandwich.  There are two recommended places to get this dish in London and both can be found on Brick Street.  One is Beigel Bake Brick Lane Bakery and Beigel Shop bills itself as “Britain’s Best and First” having opened in 1855.

This one is a bit of a stretch, but what is thought of as an American dish has its own ties to London.  It’s well-known the Brits have been putting meat and fruit into pieces for centuries and the first recorded apple pie recipe comes from 1381 in the days of Geoffrey Chaucer.  It’s fair to assume that the centuries-old recipe was printed in London, which features apples, spices, figs, raisins, pears, and the piece casing with a bit of saffron to add color to the filling.  It might not be like any other apple pie recipe you’ve ever had before, but is certainly part of the food culture of the city during that time.