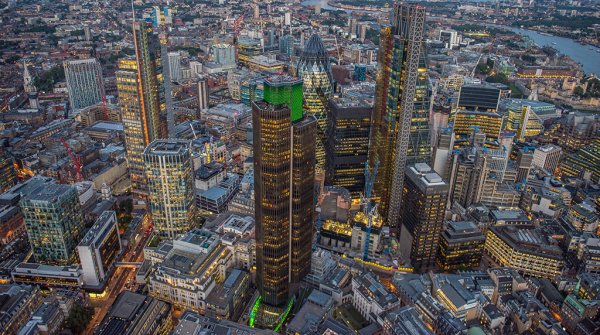 One of the jewels of post-war skyscrapers in London, Tower 42 (once known as NatWest Tower) remains the third highest building in the City of London and the eighth highest in the Greater London area.  Interestingly enough, it was actually the very first skyscraper in the City of London.  While taller buildings such as Centrepoint, Millbank Tower, and BT Tower were constructed before Tower 42, these did not meet the international standards to be called a skyscraper.  Long since vacated by its original inhabitants, Tower 42 remains as a striking piece of the city’s skyline.

Prior to Tower 42’s construction, no skyscrapers actually existed in the City of London.  The city had height restrictions to prevent the building of towers that would block important vistas and views of other prominent landmarks.  The space on which the tower would be constructed had been the property of the National Provincial Bank of England.  The bank wanted to develop a new building to meet its needs on the site and applied for outline planning permission in 1963.  Permission was granted in November 1964, but the Control Office & Industrial Development Act of 1965 halted the project until the bank received an office permit in 1968.

At the time Richard Seifert was appointed architect over the project, the National Provincial Bank merged with National Westminster Bank in 1970, meaning the new tower would be named National West Tower (or NatWest Tower for short).  Seifert met with some initial controversy over his design, which he wanted to be 198 metres and have the Grade I listed Gibson Hall demolished to accommodate his initial design.  A protection order ended up saving Gibson Hall from Seifert’s plan and the tower height was reduced to 183 metres for approval.  Seifert’s final design was for a single tower with a core and three “leaves” beginning on the fifth storey that resembles NatWest’s interlock chevrons logo.  Final approval was given in 1970 and construction started the next year.

John Mowlem & Co. began the construction in 1971 with the concrete core followed by the cantilevered floors, which gave the building great strength but limited the amount of office space.  The tower has exactly forty-two stories, with the cantilevered floors beginning on the fifth storey, though it’s actually referred to as Level 1.  The core goes another four storeys to top out at Level 46, and main contains lifts, stairs, bathrooms, and plant rooms with the cooling tower on the very top.  Several innovative technologies were used for the building’s interior, such as double-decked lifts, computer-controlled air conditioning, an internal automated “mail train” for deliveries, and an automated window washing system.  The tower was also one of the first to include sky lobbies, which is an interchange floor that enables people to change lifts to get to higher floors and thus reducing travel time as one goes higher.

Construction finished in 1980, and NatWest began to occupy the building that same year. Its official opening ceremony was conducted by Queen Elizabeth II on 11 June 1981.  Within five years, however, NatWest would relocate its headquarters after deregulation of the financial markets meant that financial organisations needed large, open trading floors to conduct their business, though the bank still kept offices in the tower.  That would ultimately change after an IRA bomb detonated in Bishopsgate, destroying most of the glazed edifice and requiring extensive renovations.  The refurbishment ultimately cost £75 million, but by the time it was finished in 1996, NatWest opted to move out rather than reoccupy its office space.  Another consequence of the bombing is its inability to gain listed status as a result of not containing original features.

It was then sold in 1998 and renamed as Tower 42.  Another refurbishment followed in 2004-2008 as well as another sale of the building in 2011.  In 2012, an LED multimedia lighting system was added to the top of the core that was completed in time to host a display for the Summer Olympics.  The 42nd storey plays host to champagne bar Vertigo 42.  Tower 42 remained the tallest tower in London for ten years until the construction of Canary Wharf, but today it still makes quite the impression on the city even though it is surrounded by taller structures.