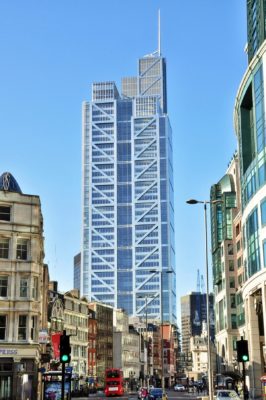 Bishopsgate certainly has its own contributions to London’s skyline including the Gherkin and the Leadenhall Building.  Rounding out the trio is 110 Bishopsgate, better known as Heron Tower (and also known as Salesforce Tower).  Finished in 2010, the tower has gained a number of claims to fame including being the tallest building in the financial district and the third tallest building in the city behind the Shard and One Canada Square.  In 2012, it was chosen as the British Council of Offices’s best commercial workplace.  As with many of London’s recent skyscrapers, its short history is filled with interesting information.

Heron Tower’s origin story actually goes back to 1999 when it was designed by Kohn Pederson Fox Associates as a new office building for Bishopsgate.  It wasn’t approved at the time, however, out of concerns that it would block the view of St. Paul’s Cathedral.  The City of London approved the final design in 2006 and Heron International signed a deal with the State General Reserve Fund of Oman for the financing.  Skanska, who had built the Gherkin, then became the contractor on the development and construction began in earnest in April 2008.

Over 2008, three cranes were erected to help build the structure and the steelwork started in October.  Most of the building was constructed throughout the course of 2009 and in July, Heron, Shanska, and KDF held a ceremony to install a time capsule in the tower’s foundations.  By December, Heron Tower took over the title of the tallest building in the City of London from Tower 42.  The “topping out” ceremony to celebrate the structural completion was attended by the Lord Mayor of London and took place on 12 April 2010.  The building was fully completed in January 2011.

On the whole, Heron Tower is a truly spectacular structure.  It has forty-six floors, thirty-six of which are used for office space.  The base floors are home to restaurants and bars as part of the tower’s mixed-use buildings as are floors 38-40, which include restaurants Sushisamba and Duck and Waffle.  In the lobby is one of the building’s most impressive features, the 70,000 litre aquarium home to 1,200 fish.  The office spaces occupying much of the tower are separated out into ten “villages” each with its own closed environment so that each firm occupying the office space can set the temperature to their own liking and ensuring that electrical or mechanical problems in one or more “village” won’t affect the others.

Heron Tower is also one of the most environmentally-friendly office buildings in the city.  The south elevation of the tower protects the building from excessive heat gain through its triple-skin glazed facade and solar panels that both shield the southern side and help Heron Tower generate its own power.  Levels 41 to 46 have air handling plant rooms for heat recovery, while the building’s adiabatic cooling uses air pressure to help control temperature and keep energy usage low.  All of these elements helped Heron Tower to earn an “Excellent” rating using the Building Research Establishment Environmental Assessment Method.

As you can see, Heron Tower is more than just another skyscraper or financial district office building.  It’s a building that documents its past while embracing the future.  It shines against the skyline for both the City of London and Greater London as a whole.  While it’s one of the city’s more recent skyscrapers, Heron Tower makes its mark amongst London’s greatest buildings.